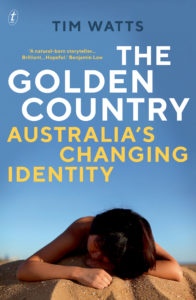 Tim Watts’ book takes its title from historical fears that Australia would become a racially blended ‘Golden Australia’ rather than a bastion of whiteness.  However, Watts is delighted that Australia’s future as a Golden Country is ‘nearly upon us’.  While Watts’ own ancestors were early European migrants, his wife is Hong Kong Chinese Australian and his children’s combined European and Sino heritage is one of the reasons Watts has written this book. Watts is also the federal Labor MP for a racially diverse western Melbourne electorate.

Watts does not yet have a major national profile, although this book suggests that he richly deserves one.  However, some readers may remember Watts’ inspired response when his companion, Labor’s then Senator Sam Dastyari (who is of Iranian origin), was racially abused at a university bar. ‘What race’, Watts memorably asked Dastyari’s harassers, ‘is dickhead’?

Watts acknowledges that he has not undertaken in-depth scholarly research for the book. But he does have masters’ degrees from both Monash University and the London School of Economics and draws on academic and other sources (such as parliamentary debates) with considerable skill.  In the process, he provides an engaging and moving account of the history of Asian-Australian communities and of how conceptions of Asian, white, and Australian national identity have been constructed.

Watts begins by outlining nineteenth century discrimination against Chinese gold diggers and ends with a roll call of the (largely overlooked) contributions Asian Australians have made to Australian society. Watts points out Asian Australians are still under-represented in our institutions and that Australian governments and the private sector are failing to utilise the language and cultural skills of Asian-Australian communities.

Much of the material Watts cites will be disturbing and eye-opening to many white Australians.  Indeed, Watts has provided a crucial service by bringing such material to a wider audience, particularly given the many denials of Australia’s racist past. In particular, Watts makes it absolutely clear that Australia’s White Australia policy was based on a racist attempt to stop non-white immigration to Australia. For example, Watts cites Australia’s first Prime Minister Edmund Barton who argues that: ‘The doctrine of the equality of man was never intended to apply to the equality of the Englishman and the Chinaman…. Nothing in this world can put these two races upon an equality’. Similarly, the Labor Party’s Chris Watson, who became Australia’s third Prime Minister, argued against the ‘racial contamination’ that would result from mixed-race marriage. (It is a quote that senior Labor Senator Penny Wong, herself the product of an interracial marriage, was to cite many years later in the marriage equality debate as clear evidence of the need to move beyond historically discriminatory views).

Watts argues that Australians need to reimagine traditional Australian identity to build a new, egalitarian one that accurately reflects and celebrates the diverse, multicultural society that we have become. Watts claims that in more recent times the policies of the Liberal party’s John Howard (who was Prime Minister for almost 12 years from 1996) facilitated this diverse society when he increased both temporary and permanent migration. Yet Howard also gave repeated assurances that Australia’s predominantly Anglo-Celtic identity and values would remain; and Watts argues that Howard’s ‘weaponisation’ of race, immigration and asylum-seeker issues, and his breaking of the previous bipartisan consensus not to exploit such issues electorally, hamstrung Australians’ ability to discuss Australia’s changing identity and to engage with past racism. Watts’ book is an important attempt to facilitate the discussion that he believes the Howard period stymied.

Watts does sometime skate over aspects of Labor’s own compromises in its attempts to defuse the identity politics of Howard and his successors. These include Labor’s support for many tough policies  on asylum seekers, including offshore detention.  However, there are hints that Watts may not have always been completely happy with Labor’s position. Watts is clearly part of the Labor tradition that seeks to expand Labor’s concept of equality beyond its original focus on improving the position of the heterosexual, white, male working class to also include pursuing equality for many other groups, including racial and ethnic ones.

Overall, this book is a commendable achievement as well as being a very good read. However, there are some aspects that Watts could have addressed in greater depth. While there are references to Indigenous Australian cultures, these could have been developed more. As Watts would no doubt acknowledge, a Golden Country will not necessarily address the legacies of settler colonialism. After all, the needs and demands of First Nations’ peoples are different from those of subsequent multicultural communities.  However, Watts does argue that the Uluru Statement from the Heart can play an important role in rebuilding an inclusive Australian identity that is true to Australian values of a fair go and egalitarianism.

It is surprising that Watts did not say more about the broader geopolitics and geoeconomics of the current moment.  If this is to be a post-Howard discussion about the politics of national identity, we need to acknowledge that the world has changed significantly since Howard’s day. Howard repeatedly claimed that Australia would not have to choose between its Anglo-Celtic historical identity and its trade relations with Asia.  He saw Australia as facilitating positive relations between the US and China. After all, his was a period in which it was assumed that the west would remain economically dominant in a globalised world and that there would be a liberalising trajectory for China.  It was a worldview that failed to anticipate either the current era of China’s President Xi Jinping or the growth of American protectionism.

However, as recent security and trade tensions demonstrate, the relative decline of the US and the rise of China is placing Australia in a very difficult position given its links to both. This position has been exacerbated by diplomatic stumbles over COVID-19, intemperate Coalition backbenchers and Australia’s legitimate concerns regarding human rights issues, including China’s treatment of Hong Kong and the Uyghur people. Unfortunately, Australians of Chinese descent have sometimes become collateral damage in those tensions as Liberal Senator Eric Abetz’ recent attempts to demand loyalty statements from Chinese Australians presenting at a parliamentary inquiry reveal.

In an Afterword to his book, Watts states that, despite his distress at Labor’s 2019 federal election loss, it is a very positive sign that the ‘election was not fought on the grounds of race.’ Watts is correct. Nonetheless, there was a notable incident when the current Minister for Trade Simon Birmingham broke with an understanding that Australia-China relations would be a non-partisan issue to suggest that Labor was soft on China. If partisan point-scoring and security impacts on Australians of Chinese descent worsen, it may have significant implications for the more inclusive Australia that Watts, as a Labor MP, presents such an eloquent and convincing case for building.

Maintaining pluralism in authoritarian systems: Lessons from Turkey and beyond 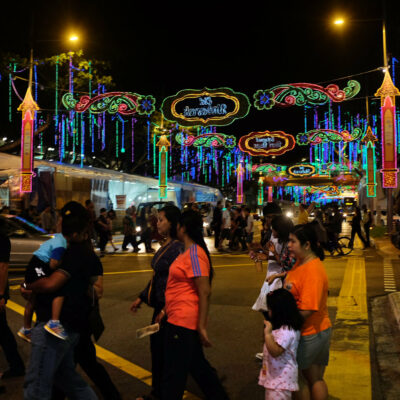 Islamophobia in Singapore and/ vs Western Islamophobia: the state, colonialism, and the Muslim experience 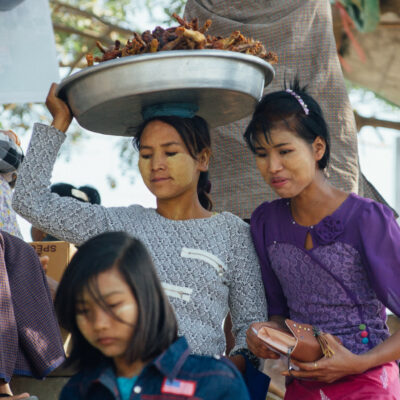