Biden’s China policy following the US withdrawal from Afghanistan

Since the U.S. withdrawal from Afghanistan and the Taliban victory, the administration of US President Joe Biden has moderated its rhetoric regarding China. It seeks to neither escalate further high-level U.S.-China tension, nor attempt to improve fragile relations. Although there appears to be less U.S. hostility toward China, US policy is fundamentally unchanged. Containment, isolation, and rollback, particularly on issues in geopolitics, high tech, human rights, and global initiatives, continue to characterise U.S. policy.

Behind continued U.S. hardline China policy, there have been two meaningful events. First, there has been mostly U.S. general silence following the inconclusive October 2021 U.S. report on the origin of the COVID-19 pandemic by the U.S. national intelligence community. Second, President Biden’s speech at the UN General Assembly (UNGA) in September 2021 did not explicitly mention China, despite White House Press Secretary Jen Psaki’s indication to the press that the president would directly criticise China in the speech.

However, in his 30-minute UNGA speech, Biden did allude to China’s activities in the Indo-Pacific region.  He vowed to ‘oppose attempts by stronger countries to dominate weaker ones whether through changes to territory by force, economic coercion, technical exploitation or disinformation.’  Moreover, he called on other countries to condemn the government oppression of ethnic and religious minorities, implying China’s Xinjiang region.  Biden also declared that the United States would pursue new rules of global trade to ensure fair competition for every nation.

The administration has encountered wide-spread criticism in domestic politics and from its allies over the mismanagement of its withdrawal from Afghanistan.  It has also faced domestic criticism from its management of the resurgence in the United States of COVID-19.

In this context, there has been an ongoing concern over the possibility of a U.S.-China military conflict over Taiwan and the South China Sea. This concern reflects the increasingly frequent and escalating military/political tension over Taiwan since April 2021. This tension has reached the greatest intensity since the 1996 U.S.-China confrontation over Taiwan.

Nonetheless, although the U.S. may ease its rhetoric, the establishment of AUKUS (the U.S., U.K. and Australia) reveals that Biden’s strategic orientation is more Indo-Pacific focused and more China-focused. Moreover, the European powers are increasingly concerned that Washington is reducing its attention on NATO, that it views its European security interests as, at best, secondary to maintaining U.S. security interests in the Indo-Pacific, and that it will not sacrifice its interests in the Indo-Pacific to strengthen NATO.

America’s withdrawal from Afghanistan will affect its China policy.  In particular, the United States will assess the impact of China’s relationship with the Taliban government on U.S. interests.

As a matter of principle, China follows its long-standing policy of non-interference in other countries’ internal affairs. This principle shapes Chinese policy in the aftermath of the Taliban’s rapid takeover of Kabul in August 2021 and then the rest of Afghanistan following the chaotic withdrawal of U.S. forces and U.S. and Afghan civilians. China has nothing to gain and much to lose should it interfere in Afghan affairs and attempt to influence Taliban domestic policy. China would undermine its cooperation with Afghanistan, but it would not be able to influence Taliban policy.

China’s priority is that the Taliban have a policy of non-interference in China’s internal affairs, particularly in relation to Xinjiang. The Chinese government emphasised this point to the Taliban delegation during its visit to China in late July 2021. It indicated that non-interference is a precondition to Chinese recognition of the Taliban government. Nonetheless, given the Taliban’s past behaviour, its fundamentalist Islamic ideology, and its evident pride following its victory over the United States, the Chinese government is only cautiously optimistic regarding Taliban assurances.

Because the Taliban fulfilled its early assurances to China and has made many promises to the Afghan people, the Chinese government is increasingly committed to developing friendly China-Afghan relations and to supporting the Taliban government.

But should China and Afghanistan develop friendly relations and significant cooperation, differences could develop over Afghanistan between China and Western countries. Cooperative China-Afghan relations could also encourage Russia to increase its involvement in Afghanistan so that China does not have sole influence with the Taliban. Chinese cooperation with Afghanistan might alienate Pakistan, which may suspect, rightly or wrongly, that China is working with the Taliban to protect and advance China’s interests in Afghanistan, at the expense of Pakistani interests.

Chinese leaders understand that a primary purpose of the Biden administration’s withdrawal from Afghanistan was to enable the United States to concentrate its resources on containing China in the Indo-Pacific. U.S. officials have frequently made this point. Thus, Beijing does not expect that the U.S. withdrawal from Afghanistan will undermine U.S. efforts to check China’s rise. Despite the Biden administration’s many domestic problems, the U.S. priority to contain China’s rise is firmly established.

The course of U.S.-China relations will be determined significantly by the central features of American policy toward China. U.S. policy on China from the beginning of the administration of Donald Trump in 2017 though the Biden administration in 2022 has aimed to contain Chinese capabilities in the following ways:

1.  Resist China’s effort to expand its strategic military power beyond the Chinese mainland and its adjacent territorial waters of 12 nautical miles;

2.  Challenge China’s huge investment in developing a first-rate navy and long-range air force, while it possesses a massive land army, thereby becoming a military superpower on land, sea, air and even in space;

3.  Undermine China’s ambition for international leadership in high-technology and China’s ability to use trade as a coercive instrument by reducing U.S. dependency on U.S.-China trade;

4.  Compete throughout the world against China’s attempt both to promote its twenty-first century ideological superiority over Western ideologies and to undermine U.S. influence.

Finally, there are past lessons in American diplomacy that deserve attention to understand possible U.S. policy in the aftermath of its failure in Afghanistan.  American national humiliation from its defeat in Vietnam and its embarrassing evacuation from Saigon in 1975, to the humiliation of the 1979-1980 Iranian hostage crisis, including President Jimmy Carter’s failure to rescue the hostages in 1980, led to a strong assertion of American nationalism that led to Ronald Reagan’s rise to the presidency and then finally to U.S. Cold War victory over the Soviet Union, Reagan’s ‘evil empire’.

Image: US President Joe Biden meets with senior advisers, January 2022, in the White House. Credit: White House/Flickr. (This image has been cropped.)

The next phase of China’s water infrastructure: a national water grid 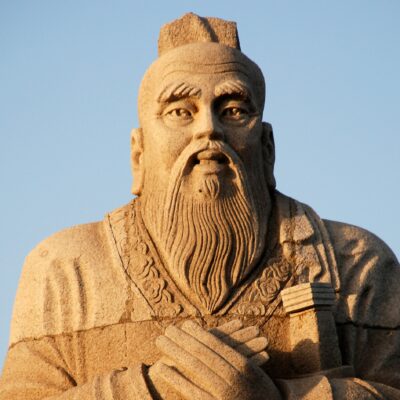 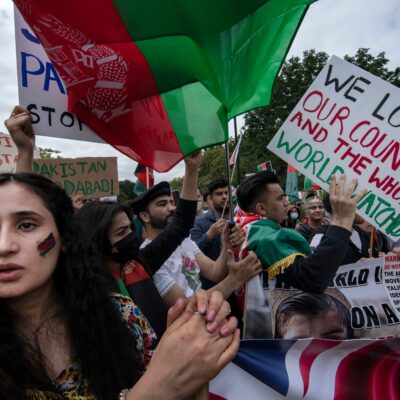 Afghanistan’s laws and legal institutions under the Taliban 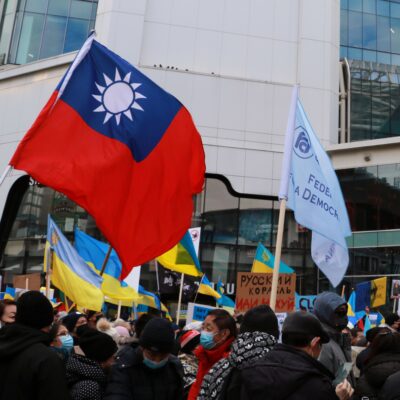