Fortress North Korea and the battle against COVID-19

On May 12, 2022, the Democratic People’s Republic of Korea (DPRK or North Korea) announced it was stepping up pandemic control measures in response to what appeared to be its first outbreak of COVID-19 (there’s no evidence COVID-19 was present in the DPRK before this year), ending a more than two-year run as a plausibly COVID-free nation.

No one knew the exact size of the outbreak, and with very limited COVID testing capacity, thermometers were the main detection tool available to healthcare workers.  The following days saw an extremely rapid rise of what was reported in the official media as ‘fever’ cases of unknown origin.  After public health restrictions on the movement of people were enforced, the number of daily fever cases peaked at almost 400,000 on 15 May 2022 and fell just as rapidly to less than 3,000 fever cases per day by early July—according to government figures.  It is possible that the high case numbers reported in the first week of the outbreak were exaggerated because doctors were being overly cautious, placing anyone with even the slightest symptom into isolation.  It is conceivable that fever case numbers fell so quickly because very few of them were cases of COVID-19, but rather the common cold, gastrointestinal infections (common in summer), and inaccurate temperature screening.  Due to a lack of testing capacity and a lack of transparency, it is still unclear how many ‘fever’ cases are actually COVID-19.

The DPRK authorities have since gained confidence in their efforts to control the outbreak, despite continually recording several thousand ‘fever’ cases each day.  The lockdown was lifted, but authorities appear to be pursuing a COVID-zero policy with the aim of eradicating the virus within their borders.  Testing centres are being set up, and strict pandemic control measures continue to be enforced.

The DPRK was the one of the first countries to close its national borders after the emergence of COVID-19 in the Chinese city of Wuhan in December 2019, and it is predicted to be the last country to reopen.  No one has been allowed to enter DPRK since flights and trains were suspended in January 2020, not even its own citizens have been allowed to return home.  Foreign diplomats faced extreme challenges exiting the DPRK throughout 2020 because outbound flights and trains were not running, and it was difficult to obtain permission from DPRK authorities to exit the country by car.  Despite over two dozen countries having embassies in the DPRK capital Pyongyang, only a handful have maintained a presence on the ground for the entire pandemic.  There is a three-month quarantine period at sea for cargo ships carrying goods bound for DPRK, greatly reducing the amount and type of imported goods.  Cargo trains between China and DPRK restarted in January 2022, but were suspended indefinitely in April 2022 following an outbreak of COVID-19 in China.

The border closure happened suddenly resulting in family separation, panic buying, and a shortage of imported goods.  These are all consequences of the pandemic which many around the world can empathise with, having experienced them first-hand.  One of the unique aspects about the situation in the DPRK is that the border closure has been much stricter and is ongoing.

There are several factors which increase DPRK’s public health resilience to COVID-19:

In response to the SARS epidemic, DPRK closed its border to tourists; and implemented a ten-day quarantine period at a government-run facility for all diplomats and humanitarian workers entering the country, and for citizens returning home.  In response to the Ebola epidemic the DPRK closed its border to tourists for five months in 2014-2015 and implemented a 21-day quarantine for diplomats, humanitarian workers, and citizens returning home.

COVID-19 control measures have been enforced throughout the pandemic, increasing at times of heightened concern, and culminating in lockdowns in May and June 2022.  These measures included mask wearing, social distancing, increased hand washing, disinfection of high touch surfaces, and public education about virus transmission methods.  Notably, agricultural work has continued despite lockdowns to ensure domestic food production is maintained.  A system of fever screening and isolation is reportedly being implemented in the DPRK and is likely to be their best defence against the spread of the virus.  The Pyongyang authorities have the power to close restaurants, markets, and other places of close contact more readily than in many other countries.  Likewise, the ability to mobilise a large army to carry out pandemic control measures gives Pyongyang authorities more options in the battle against COVID-19 than governments elsewhere.

However, there are several significant factors which increase the DPRK’s vulnerability to COVID-19:

Other countries of comparable economic status faced similar challenges when COVID-19 arrived on their shores, however a challenge particular to the DPRK is the lack of tuberculosis and hepatitis medicines.  According to the World Health Organisation (WHO), DPRK’s estimated TB case load was 135,000 in 2020, a figure significantly higher than in neighbouring countries. According to medical personnel I’ve spoken to, stocks of TB antibiotics ran out several months into the pandemic and couldn’t be replenished due to the border closure, leaving TB patients with no reliable treatment options.  Furthermore, TB patients who are unable to complete their treatment regimens are more likely to develop multidrug-resistant TB.

The lack of any WHO or UN agency staff on the ground in the DPRK further increases the DPRK’s vulnerability to COVID-19.  In addition, international staff turnover at the WHO and UN agencies has exacerbated existing communication challenges between Pyongyang-based national and overseas-based international staff.

The DPRK population is currently unvaccinated, and it is unclear whether a plan exists to implement a vaccination programme.

DPRK was offered 1.9 million doses of AstraZeneca and three million doses of Sinovac by the WHO-led COVAX distribution program in late 2021, however these offers were both declined.  The process which led to the decision to decline the vaccine offers has not been made public, however DPRK authorities’ logic was that as a COVID-free nation in 2021, their need for vaccines was not as urgent at other countries who were suffering a high number of COVID deaths on a daily basis.  Furthermore, Pyongyang was likely unwilling to allow foreigners into the country to manage or monitor a vaccine program as this would result in a partial surrendering of control to foreigners.  In addition, the quantity of doses offered would not have been sufficient to protect a population of 26 million people. Further, if DPRK was COVID-free, and there’s no evidence COVID had entered the nation before this year, authorities may have determined the risk of COVID entering the country via the vaccine programme (either on contaminated vaccine packaging or by an infected individual), to be greater than the benefit those vaccines would provide.  That calculation no longer holds true and questions are being raised about why the authorities in Pyongyang have not made vaccinations a priority.  Another factor is the belief that vaccines designed to protect against the original Wuhan strain of COVID, do not provide the same level of protection against the Omicron strain, which is the one currently in the DPRK.

In parallel with changes happening in other countries, public health restrictions on movement have expedited the uptake of communication technologies in the DPRK including a rapid increase in online learning and video conferencing.  Universities are increasing their online course offerings, and entire degrees can be completed remotely.  These can be accessed via the domestic intranet, which is gaining users, while access to the internet (world wide web) remains extremely limited.  The pandemic has brought about the first online training and professional development programs delivered by foreign non-government organisations and universities.  Such use of video conferencing for educational purposes connecting people in Pyongyang with overseas partners was unimaginable before the pandemic.

Due to the long-term nature of the border closure, it is unlikely that humanitarian programs will be able to pick up where they left off when the pandemic struck.  Rather, the situation on the ground is anticipated to have changed significantly in the intervening years, requiring an entirely new needs assessment, and potentially starting all over again.  Responding to COVID-19 is now the top public health priority of the DPRK Ministry of Public Health so other health conditions such as TB and hepatitis are not receiving the attention they once did.  A lack of medical care results in poor health outcomes for people with existing conditions and increases the burden on the health system in the long term.  The legacy of this pandemic will be a much higher, steeper mountain to climb in terms of addressing public health needs.

Finally, increased isolation from the international community and a lack of imported goods are likely to have a long-term impact on the local population, driving people to become more insular and self-reliant.  All aspects of life are potentially impacted by the border closure and public health measures from the way people conduct business to the career paths they choose.  With international supply chains cut by the border closure, businesspeople would be looking for domestic suppliers of previously imported products, but it is unlikely domestic supply could be sufficient to meet the basic needs of the population.  The border closure is undoubtedly causing economic hardship as people struggle to access basic goods. When cargo trains from China finally restarted in early 2022, in-demand products such as cooking oil and wheat flour were at the top of the import list.

Those citizens left stranded outside their homeland when the border shut have been living in long-term limbo, tentatively availing themselves of new educational and business opportunities, but unable to plan for the future without certainty on when they will be called to return home.

One possible silver lining of the pandemic is the increased attention on public health and hygiene measures which could potentially see a long-term improvement in access to clean water and a cultural change in hygiene practices, thereby decreasing the incidence of waterborne infectious diseases.  Gastrointestinal infections have been commonplace as any seasoned visitor to the DPRK could attest, but the pandemic has brought about increased attention to handwashing and kitchen hygiene practices, which could lead to a long-term decrease in these illnesses.  DPRK authorities are now publicly advocating for the supply of boiled water to public institutions and improved sewage disposal practices, issues which were previously not given the attention they deserved.  As part of its pandemic coverage, the Korea Central News Agency, the official news media of the DPRK, has been publishing reports on clean water supply and hygiene on almost a daily basis.  Furthermore, the systematic monitoring of disease outbreaks could have a positive impact on public health.

The full extent of the impact COVID-19 and related public health measures are currently having on local populations in the DPRK remains opaque.  The DPRK government could save many lives by implementing a vaccination programme. Meanwhile, with COVID-19 the top priority, urgent and pressing public health needs such as TB, hepatitis, and nutrition, are being deprioritised.  The DPRK is following a similar approach to China, which maintains strict pandemic control measures and border restrictions despite numerous outbreaks of the virus within its borders.  The DPRK appears intent on maintaining its fortress and is unlikely to open up despite COVID-19 being present.

Main image: Mural on the wall of Pyongyang Metro. Credit: Stephan/Flickr. This image has been cropped.

'Happy Together: Bridging the Australia-China Divide' by David Walker and Li Yao, with Karen Walker 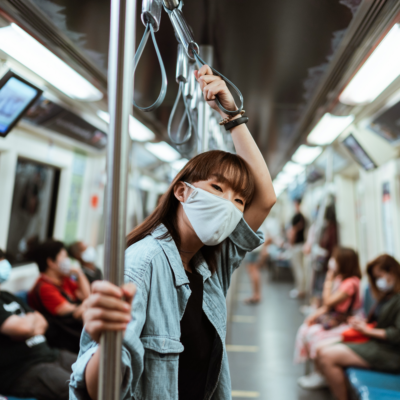 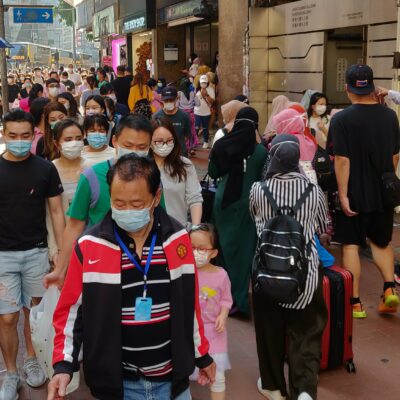