COVID-19: The politics of local responses in Indonesia

As of mid-August 2020, Indonesia had recorded more than 132,000 COVID-19 cases, making it the nation with the highest number of cases in Southeast Asia—higher even than China’s officially-reported figures.

Many scholars and pundits have blamed this outcome on a disjointed policy response at the national level and incompetence on the part of the national bureaucracy in implementing these policies. But sub-national governments (provincial and city/district) have also played an important role in determining Indonesia’s response to the crisis, claiming that they have shared responsibility for addressing the crisis.

While local governments have often framed their responses in technocratic terms—that is, as being based on rational technical calculations about how best to address the public health and economic effects of the crisis—these responses have also been driven by deep-seated political and economic interests. Specifically, they have reflected efforts by local politicians to strengthen their grip on power.

Furthermore, the claiming of responsibility for managing the crisis and concomitant authority by local governments has inhibited an effective response to the crisis. While many local leaders have tried to inject innovation and creativity into their handling of the pandemic, they have often had political interests or been constrained by the interests of others that have run counter to what is required to combat the continuing public health crisis.

In the early phase of outbreak, the inadequate nature of Indonesia’s national institutional and healthcare capacity to respond was apparent. The Ministry of Health centralised a widely-used COVID-19 test, which resulted in all samples being sent to its Jakarta-based Health Research and Development Agency (Balitbangkes), rather than being processed by regional laboratories. This laboratory was the only one in Indonesia which met the standards of the World Health Organisation, but it could only handle 1,000 samples per day and took 10-14 days to deliver each result.

Amid growing criticism about the national government’s response to the pandemic, the Health Ministry’s Disease Control and Prevention Director, Achmad Yurianto, downplayed scientific information about it, saying that fully-informing the public would have created panic. At the beginning of the virus’ appearance, Indonesia’s Health Minister, Terawan Agus Putranto, who had long downplayed its dangers, suggested that prayer helped keep COVID-19 out of Indonesia and that the Almighty would protect the nation. After acknowledging the first infections, he fed speculation that Indonesian herbal medicine could cure COVID-19.

These initial problematic responses were further aggravated by complicated bureaucracy within the national health ministry in relation to test kits and medical equipment needed to carry out wider-scale testing. Though the ministry quickly appointed COVID-19 referral hospitals (hospitals identified to handle infected patients who received subsidised treatment) in early March as the first death was reported, the hospitals were not ready to do testing because they were relying on the national government’s provision of rapid test kits, personal protective equipment and ventilators.

President Joko Widodo was playing catch-up from the moment the virus entered Indonesia. Only on March 12 did he issue a presidential decree establishing a taskforce and appointing the National Disaster Mitigation Agency (BNPB) to lead it. The establishment of the taskforce was supposed to provide better inter-agency coordination for testing, logistics, and goods and services procurement. However, in late March, even after the Finance Minister Sri Mulyani announced that 68 trillion rupiah would be allocated for procurement and health facilities, the taskforce still could not decide which equipment to purchase. By the end of May, the COVID-19 taskforce and the health ministry were only able to deliver 10,000 tests per day, resulting in substantial numbers of COVID-19 cases that were never identified. Meanwhile, worried about potential social unrest and economic fallout, the President continued to be hesitant about what type of restrictions should be imposed, which became a source of tension between sub-national governments and the national government.

The rise of the local response

The governance failure of national politicians and policy makers to properly respond to the crisis, has provided opportunities for sub-national governments to be involved to meet their population’s needs.

Many regional heads mobilised their local resources and equipped public service hospitals (badan layanan umum) and research labs with testing and diagnostic capability as well as personal protective equipment. For example, West Java Governor, Ridwan Kamil, relied on a scientific approach and benchmarked his province’s policies to proven international models of testing such as those in South Korea. Given that West Java’s population is similar to South Korea’s, he directly purchased test kits from South Korea and attempted to achieve a similar testing ratio. He was also at the forefront of local responses to the crisis by launching a mobile app called Pikobar. This allowed citizens to access the latest data, clarify misinformation, and request emergency assistance.

In a similar vein, Central Java Governor, Ganjar Pranowo, having acknowledged that rapid test kits based on antibody detection are far less accurate than Polymerase Chain Reaction (PCR)-based tests, increased the number of referral hospitals and supported innovative strategies such as drive-through PCR tests. The drive-through service introduced in Semarang in April was able to process up to 100 swab samples per day.

Also crucial to the sub-national response was that the central government had, to some extent, outsourced new social policy measures to sub-national governments due to its own governance failures. At a local level, Murdoch University scholar Rebecca Meckelburg, through her direct observations in Salatiga, Central Java, found that Salatiga City Council has made a significant budget available to provide aid for local residents who have lost their income. At a provincial level, similar action has also been undertaken by the West Sumatra government, jointly coordinated with city mayors. The Governor of West Sumatra, Irwan Prayitno, lamented the strict conditions imposed by the central government that made thousands of vulnerable families unable to qualify for aid; so the regional government redirected its budget to provide some social safety net programs for those in need. This example shows that there is now recognition that nation-wide distributive frameworks can be implemented and governed at local level.

Almost all regional governments in Indonesia have detached themselves from the ambivalent central government and developed their own responses to the crisis. However, this only tells half of the story. While regional governments have shown some responsibility in crisis management, political elites have also been motivated by a desire to defend or strengthen their grip on power. COVID-19-related policies and governance have highlighted political rivalries between regional leaders ahead of the upcoming 2020 regional elections.

For example, in East Java a feud between Governor Khofifah Indar Parawansa and Surabaya Mayor Tri Rismaharini (‘Risma’) has erupted over how to handle the pandemic. In April, the two leaders disagreed over whether to enact large-scale social restrictions. Khofifah publicly criticised Risma and her team for what Khofifah described as their “late” response to a cluster of COVID-19 infections at a tobacco factory owned by PT HM Sampoerna in Surabaya.  In May, Risma accused Khofifah of “boycotting” her job, because she sent two COVID-19 mobile-testing cars loaned by the National Disaster Mitigation Agency to Tulungagung, despite Surabaya lacking PCR testing facilities. These disagreements appeared to be political infighting between two political party elites—Khofifah representing the National Awakening Party (PKB) and Risma representing the Indonesian Democratic Party of Struggle (PDIP)—rather than legitimate disagreements over the best response.

In South Sulawesi province (which was ranked third in terms of the number of confirmed COVID-19 cases behind East Java as of June) the only response to the crisis has been the imposition of limits on the public’s movements. The Governor, HM Nurdin Abdullah, has claimed that the high number of COVID-cases were only a result of widespread testing. Since the outbreak, the Governor has dismissed and replaced Makassar’s acting city mayor many times, claiming that the dismissals are due to the mayors’ lack of competence and expertise in carrying out the provincial government’s COVID-19 response.

Some sub-national governments have reportedly misused social assistance funds (bansos) provided by the Ministry of Social Affairs of Indonesia to strengthen party cartels and attract voters prior to the upcoming regional elections. Tempo has reported that four provincial governments including Bengkulu, Lampung, Riau, and Jambi as well as 17 district/city level governments have used bansos to further their own interests. This has included distributing staple food assistance on behalf of the regional head and attaching the regional head’s photo and political party’s logo on the bansos that are actually provided by the central government.

At the beginning of the COVID-19 outbreak in Indonesia, there seemed to be a political silver lining to the pandemic, with some regional heads establishing reliable public health projects amidst the ineffective response of the central government. However, it has also become evident that a number of regional leaders responded to COVID-19 in ways that consolidate their power. What on the surface seemed to be responsible action by sub-national governments has, on further examination, revealed itself to be driven by deep-seated political and economic interests. To understand the uneven and contradictory responses to COVID-19 in Indonesia, we therefore need to understand the reorganisation of power among and between different levels of government and their motivations, at least until regional elections are held in December.

Is ASEAN doing enough to address business and human rights? 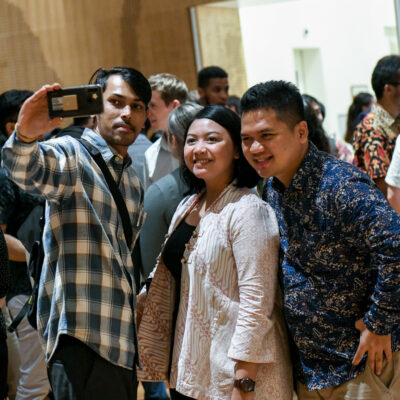